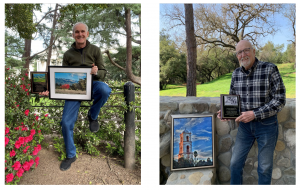 On February 27, the Fund conferred its prestigious James D. Loebl Award on former Ojai Mayor Johnny Johnston and former Ventura County District 1 Supervisor Steve Bennett. The award is conferred from time to time to a person who has played a leading role in protecting and sustaining the environmental quality of the Ojai Valley for the public benefit. It is named in memory of the late James D. Loebl, a renowned civic leader who served on the Ojai City Council from 1968 to 1996.