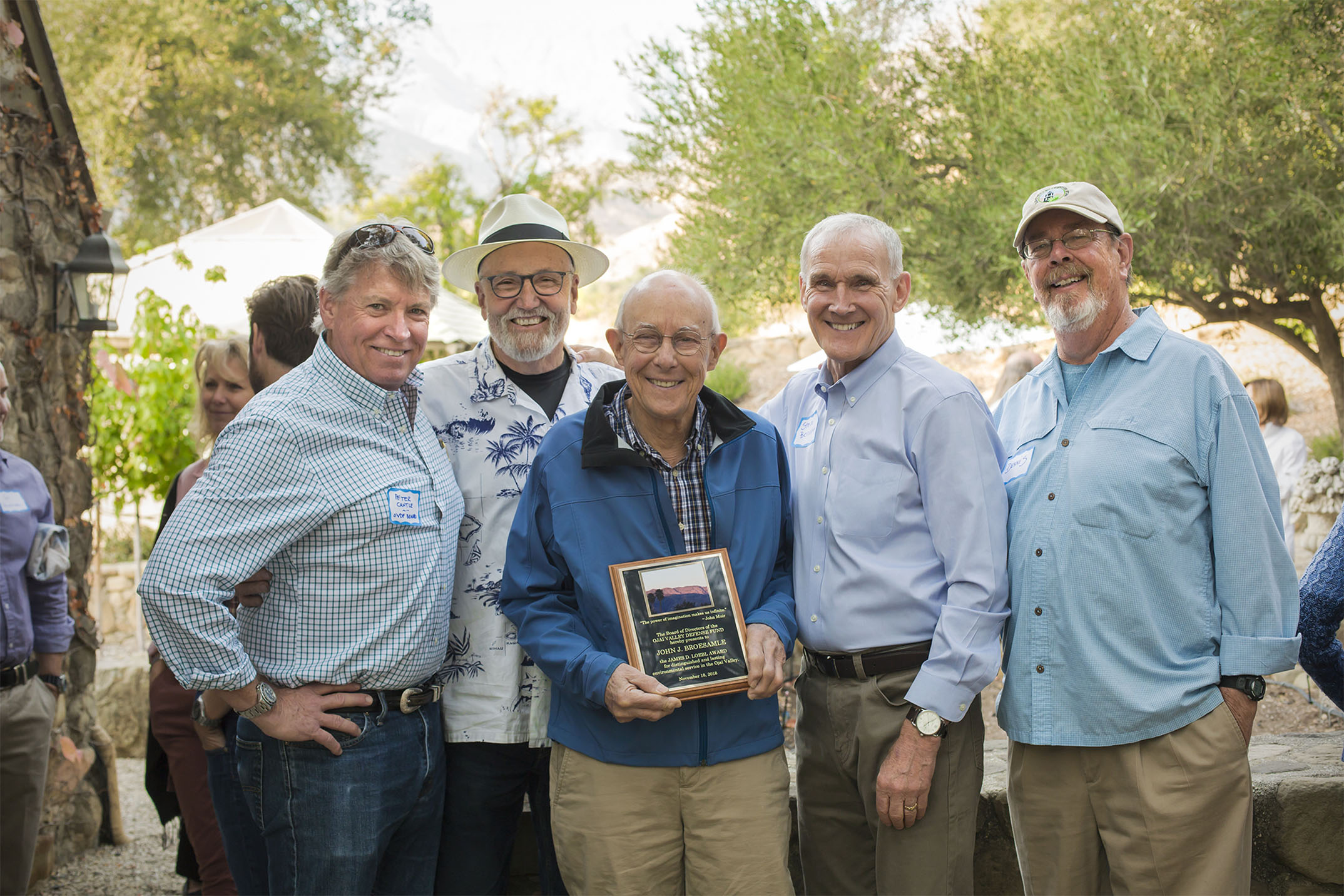 An Ojai man who for three decades has fought to preserve the environmental quality of the Ojai Valley was honored at a Nov. 18 event attended by many of the valley’s environmental leaders.

Peter Cantle, president of the Ojai Valley Defense Fund, presented to civic leader John Broesamle the James D. Loebl Award for sustained environmental excellence. “He’s one of a few people that have profoundly influenced the valley for the better,” Cantle said.

The award is named for five-time Ojai Mayor Jim Loebl, who opposed rampant development, a freeway through the Ojai Valley, gypsum and uranium mines in the Los Padres National Forest and the Weldon Canyon Landfill. Loebl passed away in 2003.

Broesamle is the second recipient of the award, created and presented for the first time in 2011, to environ- mental activist Pat Weinberger.

For 30 years, John and his wife, Kathy, have been actively involved in the environmental well-being of the Ojai Valley. “When you get John, you get Kathy. They’re a tandem,” Cantle said. “The love they have for this valley is just an unplumbable depth.”

As president of Ojai Valley Land Conservancy from 1998 to 2000, John was involved in the acquisition of the Ventura River Preserve, Ojai Meadows Preserve and Cluff Vista Park.

He was also the founding president of OVDF, a community chest that serves to protect the environment of the valley. Because of John and Kathy’s leadership and philanthropy, the fund now stands at a $1 million, ac- cording to Cantle.

“They’re deeply generous not just with their money but with their time. The volunteerism and spirit of community they have is immense,” said Cantle, who called Broesamle his mentor. “He’s tireless, determined, passionate and compassionate, visionary and strategic, and John is also profoundly wise, and that wisdom is such a valuable attribute for the valley.”

Among those attending the event were representatives from the Defense Fund, Citizens for Responsible Oil and Gas, OVLC, Ojai Mayor Johnny Johnston and 1st District Supervisor Steve Bennett, who represents the Ojai Valley.

“I just think they’re the epitome of effectiveness. When they touch something, they make good things hap- pen,” Bennett said of the Broesamles. “And they both have a way to do it with a certain grace and humor that makes it enjoyable, and that’s a real gift.”

Bennett said it’s important for a community to have effective people like John and Kathy. “Because they’ve been successful, other people are willing to tackle things. It creates a sort of positive energy,” he said.

Ojai Mayor Johnny Johnston agreed, calling Broesamle an inspiration for the community. “I don’t know of anybody I’ve run across who had the combination of tenacity, strength and civility in pursuing things for the public good. It’s a blessing that the valley has had someone like John,” Johnston said.

John Broesamle describes some of the past environmental threats the valley has faced at the Ojai Valley Museum's Town Talk, "Defending The Ojai." Photo by Misty Hall